More Dogs Ride In A Ruff Land™ Than Any Other Performance Kennel!

For 2022, we are introducing newly designed Ruff Land Kennels. The fact is that we’ve sold so many kennels in the past few years that our molds are beginning to show wear. So, we took this opportunity, in building all new molds, to make some refinements to our kennels. Most notably, all kennels now include handles that are recessed for stacking and accessorizing. Fit and finish is also much more uniform. And, we will be able to offer a wider variety of accessories many of which will be specifically designed to fit the various size kennels. Rest assured all GenII kennels will stack with previous versions. Finally, we are also introducing a new standard color, Millstone! 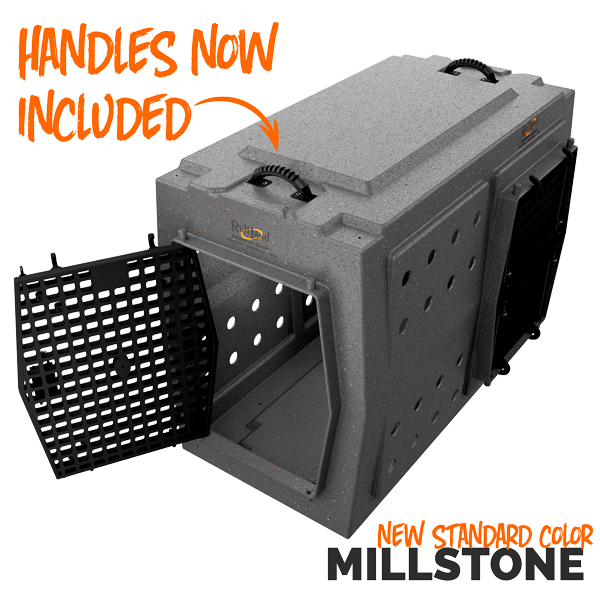 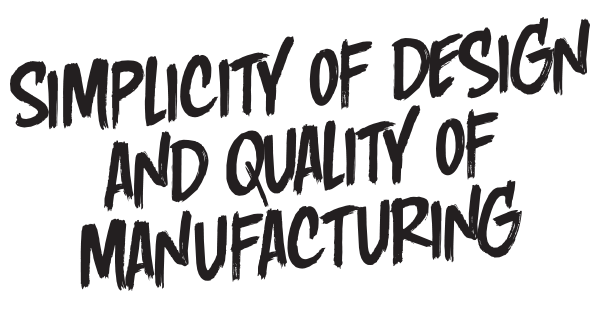 “I am not easily impressed with new equipment, but the simplicity of design and quality of manufacturing immediately caught my attention. I’ve owned and used dozens of portable kennels and have always looked for one that could withstand the abuse of trainers, handlers and guides. Finally, something new that should get dog trainers and hunters excited. Yes, its a variation of an old theme but, contrary to popular belief, a better mousetrap can be made. That variation is the new Ruff Land Kennel Dog Crate.”J. Munshaur, New Albany, IN 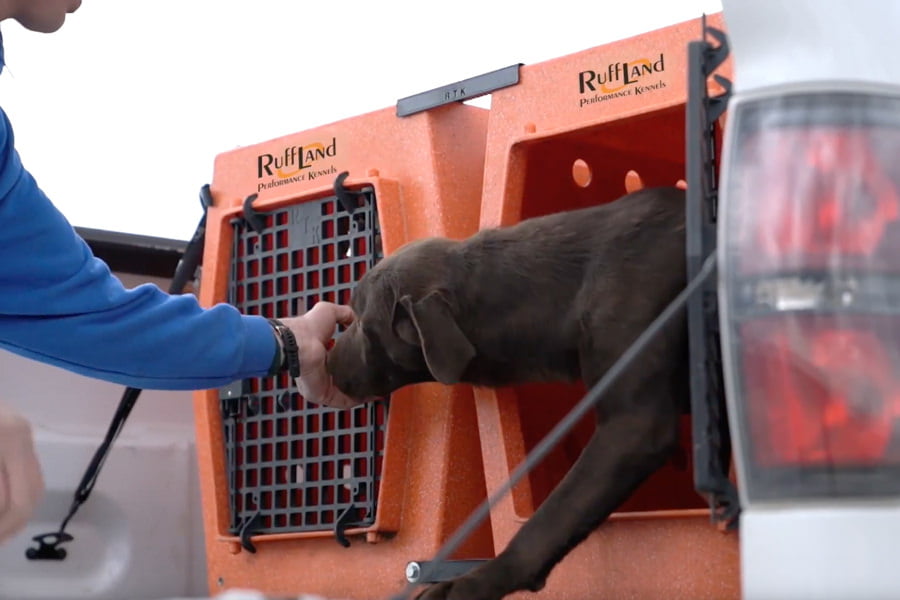 Built tough, to last a lifetime!

Ruff Land™ kennels feature one-piece roto-molded construction from UV-stabilized polyethylene. This means no assembly and no bolt-through ledge (as on two-piece kennels) which saves up to 3 inches of side space. It also makes for a much stronger kennel. And, because there are no seams, it is also much easier to clean. Finally, a Ruff Land kennel won’t crack even in extreme subzero weather. 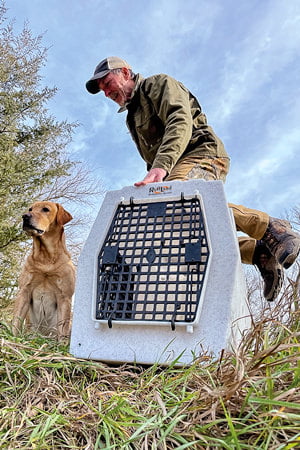 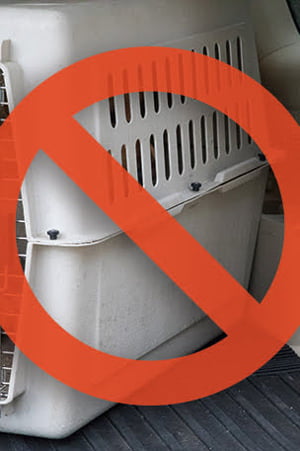 No bolt-through ledge saves up to 3 inches of side space. 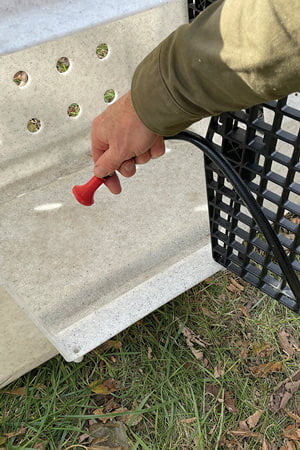 No seams (and removable doors) for easier cleaning.

It’s an unfortunate fact that too many dogs are injured or killed every year in vehicle accidents. The truth is, traditional dog kennels are simply not designed to protect their four-legged passengers. Ruff Land kennels feature race car-inspired Ruff-Flex™ Energy Dissipation Technology, a series of design elements that dramatically improve the odds of your dog surviving an accident.

Here’s how it works:

Most kennels are simply not strong enough to protect your dog in an impact situation. Ruff Land’s one-piece roto-molded construction is extremely strong. The walls, top and floor on Ruff Land Kennels also have built-in flexibility which absorbs energy that would otherwise be transferred to your dog. This is where the “stiff”, two-walled plastic kennels, which claim to be safer, fail. They may not break, but when your dog hits the side of the kennel, there is no give like there is with a Ruff Land. The raised floor in a Ruff Land also serves to provide both strength and cushion as does the designed-in body crease around the middle of the kennel. Likewise, the composite doors on a Ruff Land kennel are remarkably strong and designed to absorb energy. Plus, they feature six locking lugs where other kennels have no more than four. Then there are the all-important heavy-duty tie-downs which you should always use. If your kennel is connected to your truck it can take advantage of your truck absorbing impact energy. But only if the tie downs are designed properly. Ruff Land tie downs are designed like the driver retention devices on a race car. 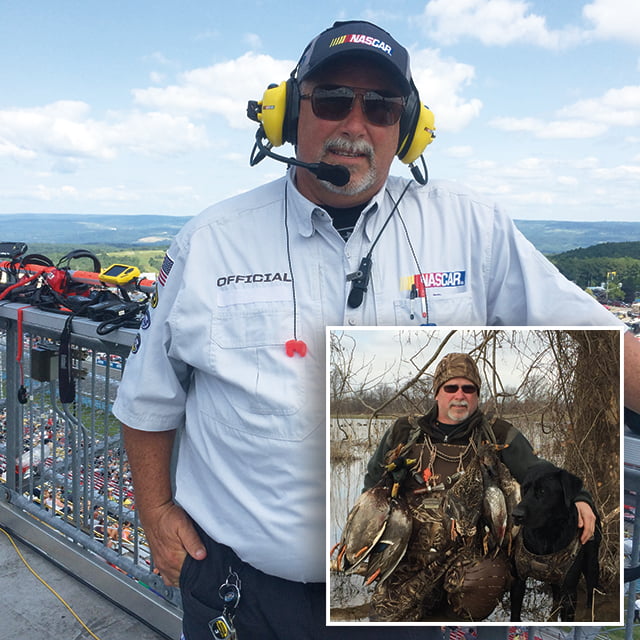 There is nothing more important to NASCAR than driver safety. A key attribute to all safety efforts is building flexibility into the race car to absorb and dissipate energy. Ruff Land employs these same proven energy absorbing principles into their kennels, unlike other kennel brands that claim safety. If you want a kennel that is built for safety, buy a Ruff Land. Rick Noble, former NASCAR Safety Official

What people are saying about Ruff Land Kennels 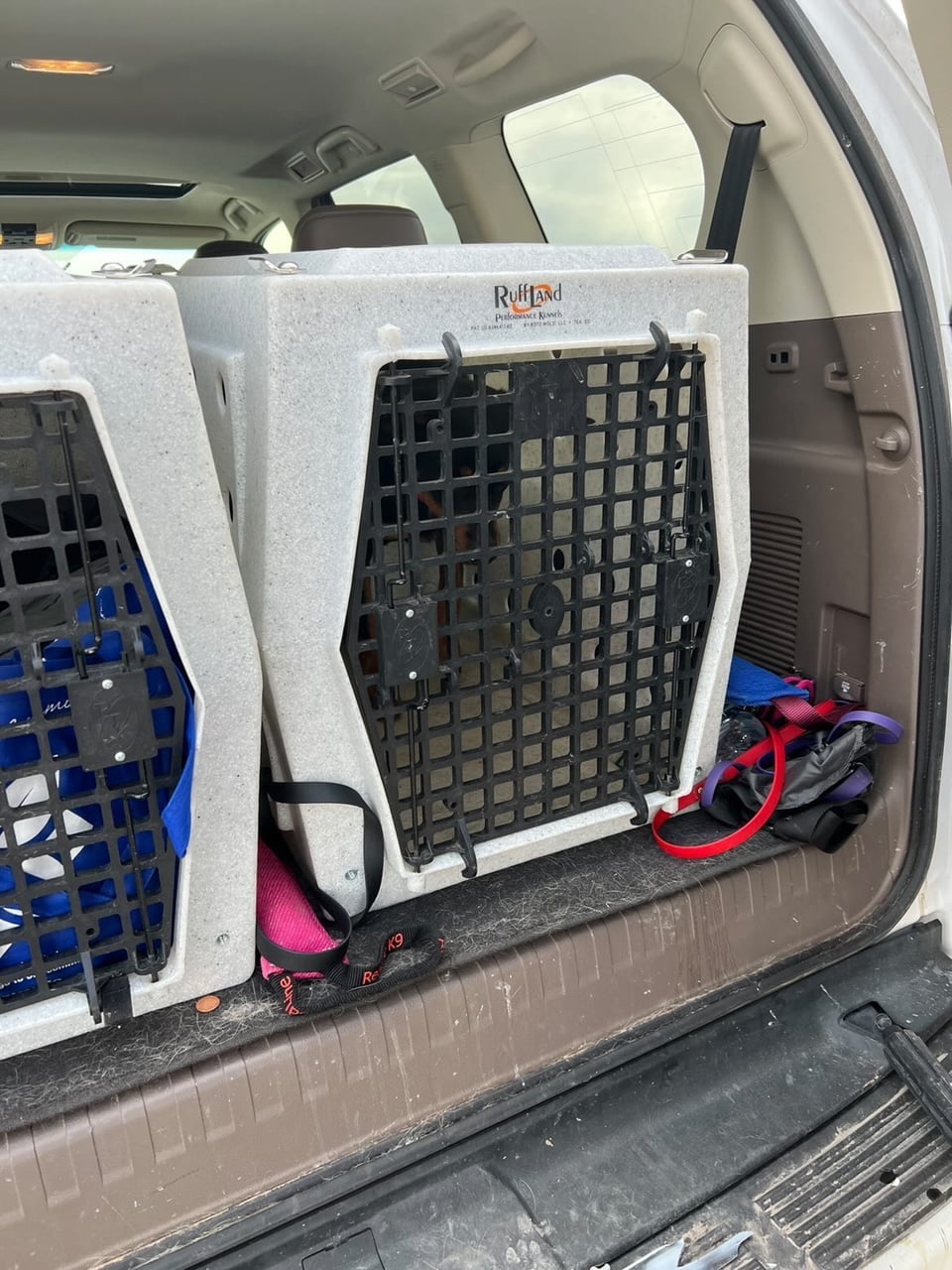 Your kennels have protected my dogs in not one but 2 car accidents. I can’t thank you guys enough. My little demon dog thanks you for your crates today especially after getting rear ended on the interstate. 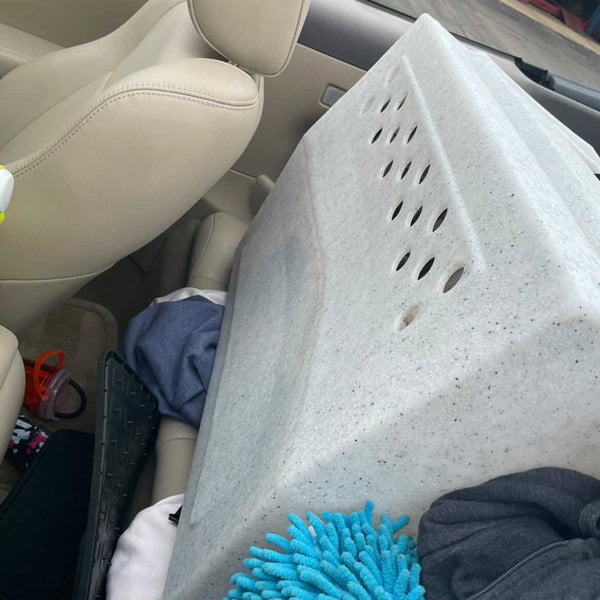 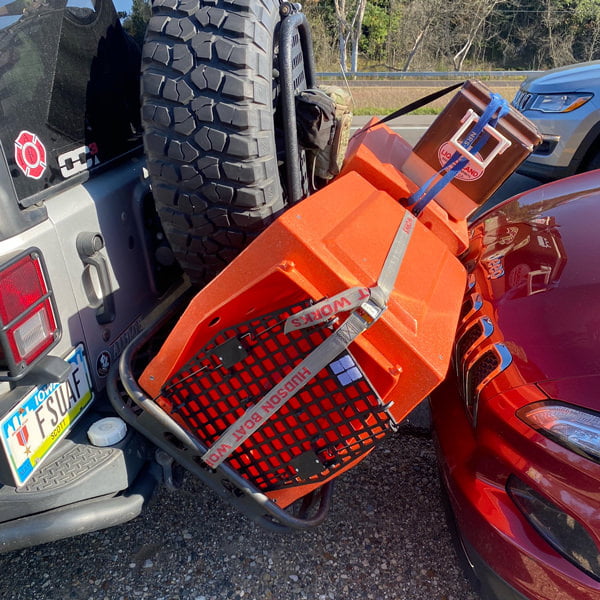 I was rear-ended on the highway while transporting kennels (without dogs) on a hitch basket (my truck broke down).  I was able to get the dents out by punching with my hand.  The other crates I owned would have been demolished so this is a great testament to the durability of Ruff Land Kennels.

I just wanted to let you know that, because of your safe and awesome kennels, a dear friend of ours and two Go Team Therapy dog members were able to walk away, without a scratch (both human and dogs), after being rear-ended by a car going over 100 miles an hour last night in Missouri. Jaclyn was doing a solo, 25-hour drive with her Maltipoo, Oliver, who was in his RuffLand kennel in the front of her minivan. But, it was a Belgian Malinois, Keres, in the back of her van, that took the brunt of the hit. Keres was pinned inside the van because of the crushing of the back door into the kennel but was 100% unharmed and very calm due to the enormous amount of training Jaclyn has done with her. The Ruff Land kennel not only saved Keres but it also prevented the minivan from collapsing in on Jaclyn and Oliver. So, I thank you for your wonderful product and I will be placing an order for a RuffLand kennel for my own dog.

Built smart, with features that matter 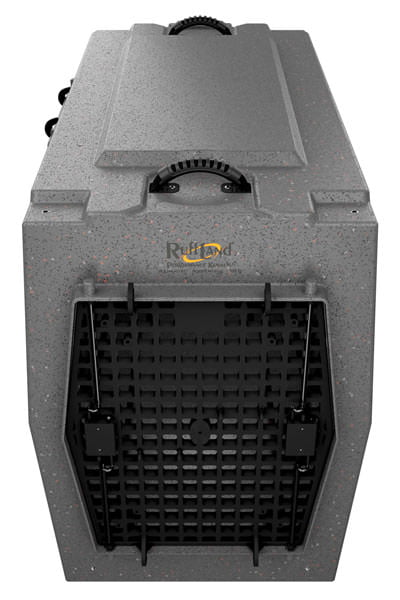 All Gen II RuffLand kennels come with integrated handles for easier transport and lifting. The handles are recessed for stacking and accessorizing. 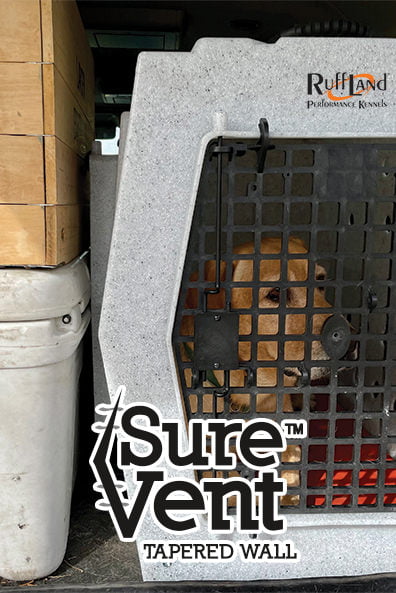 The sidewalls on all Ruff Land kennels feature a series of vent holes. These vent holes ensure proper air circulation for your dog. Ruff Land took this one step further by tapering the side walls so that the vent holes will never get plugged, even if you slide the kennel up against a wall or some other flat sided object. 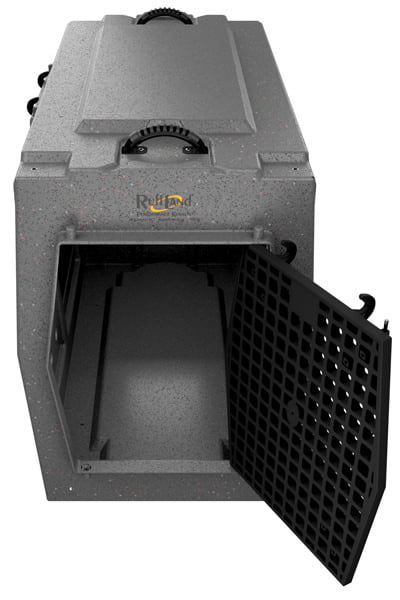 The interior floor in a Ruff Land kennel is raised so that debris and liquids that fall or spill off to the side are channeled away from your dog. This UpSide™ raised floor design also creates some flex for a built-in cushioning effect for your dog as it rides in your truck. 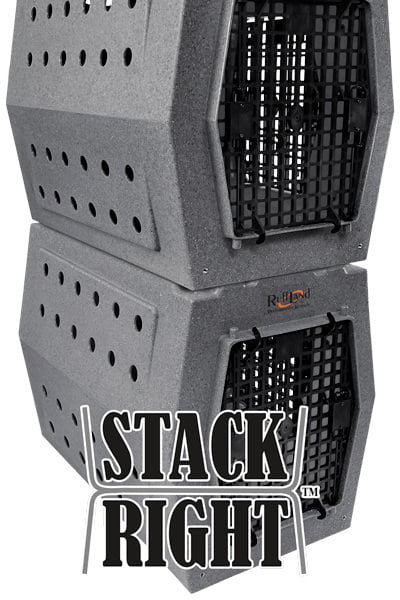 The tops and bottoms of Ruff Land kennels all feature form-fit nesting that allows the kennels to fit together, making them stackable. 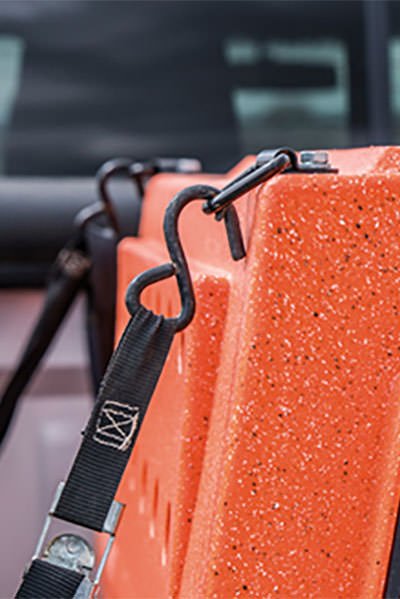 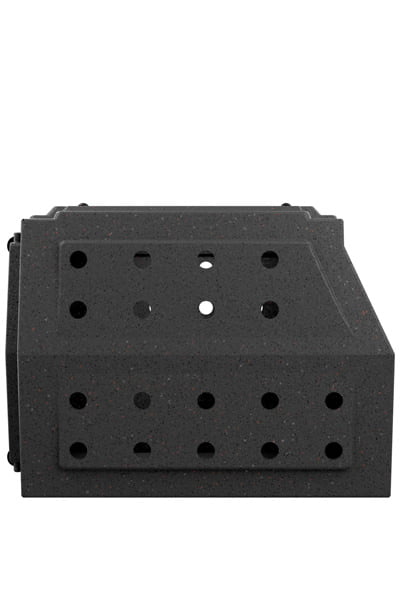 Select Ruff Land kennels feature a SlantBack™ design, an angled back end that fits perfectly up against the canted second seat on most SUVs.

Built for you, with your door system of choice

The door system on Ruff Land™ kennels can be configured to your liking with doors on both ends or on one end and either side. Our handy side doors allow you to put the kennel lengthwise on a back seat and still give you an available access door without having to remove the kennel from your truck, SUV or car.

All RuffLand™ Kennel Doors Are Unique In Six Ways:

They are constructed of an ultra-tough glass-filled composite.

They’re ambidextrous and can swing either way. 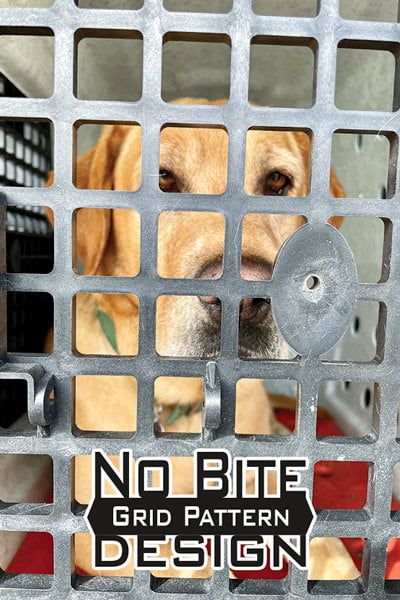 They feature a no-bite grid pattern that precludes dogs from chewing.

Rattle-less (if you’ve owned other kennels you know just how annoying this can be). 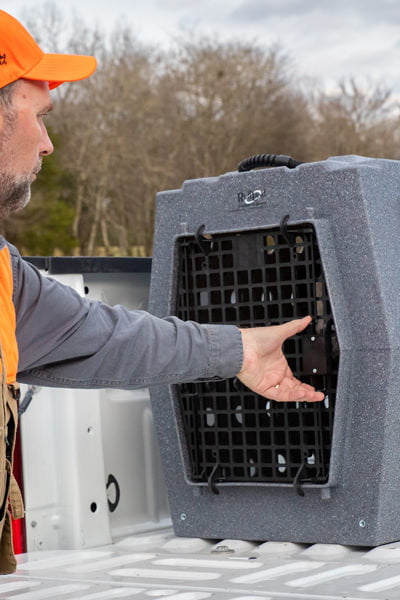 They feature an easy-to-operate latch with a durable, secure latch cover (unlike other kennels where the latch cover can fall off causing the latch mechanism to fall apart). 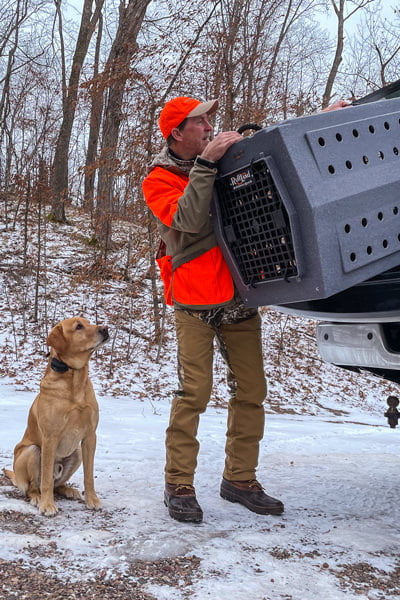 They will never rust.

Which door configuration works for you? 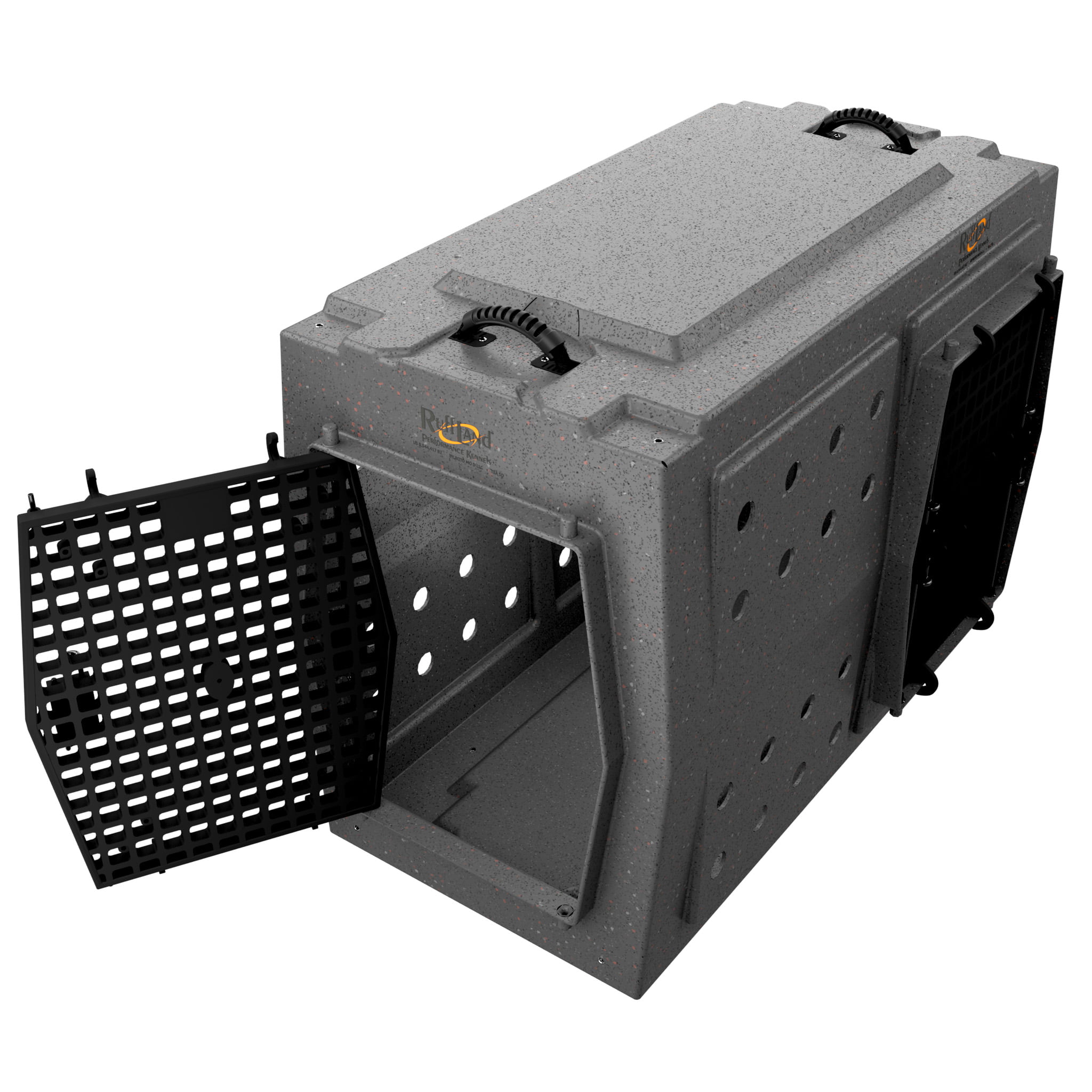 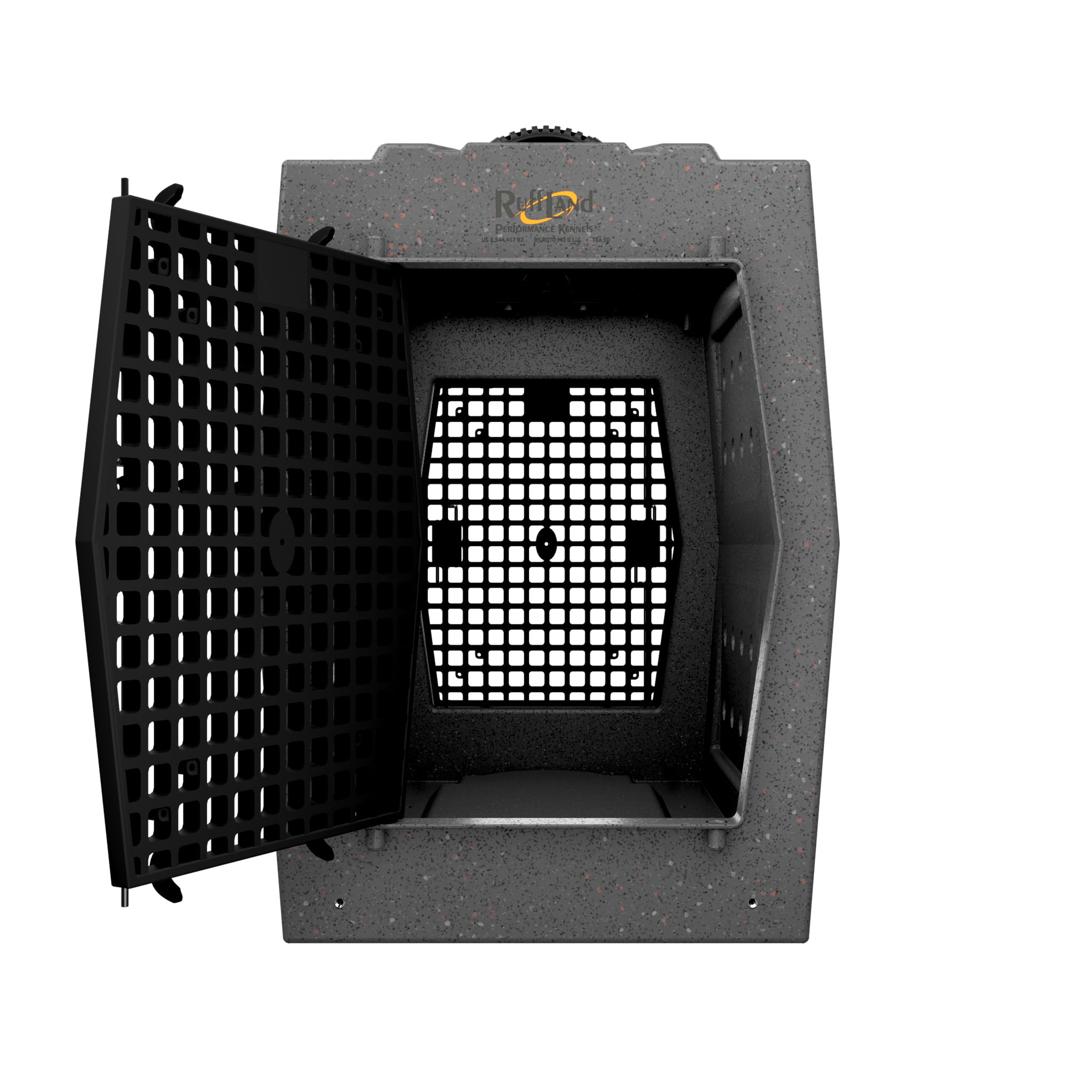 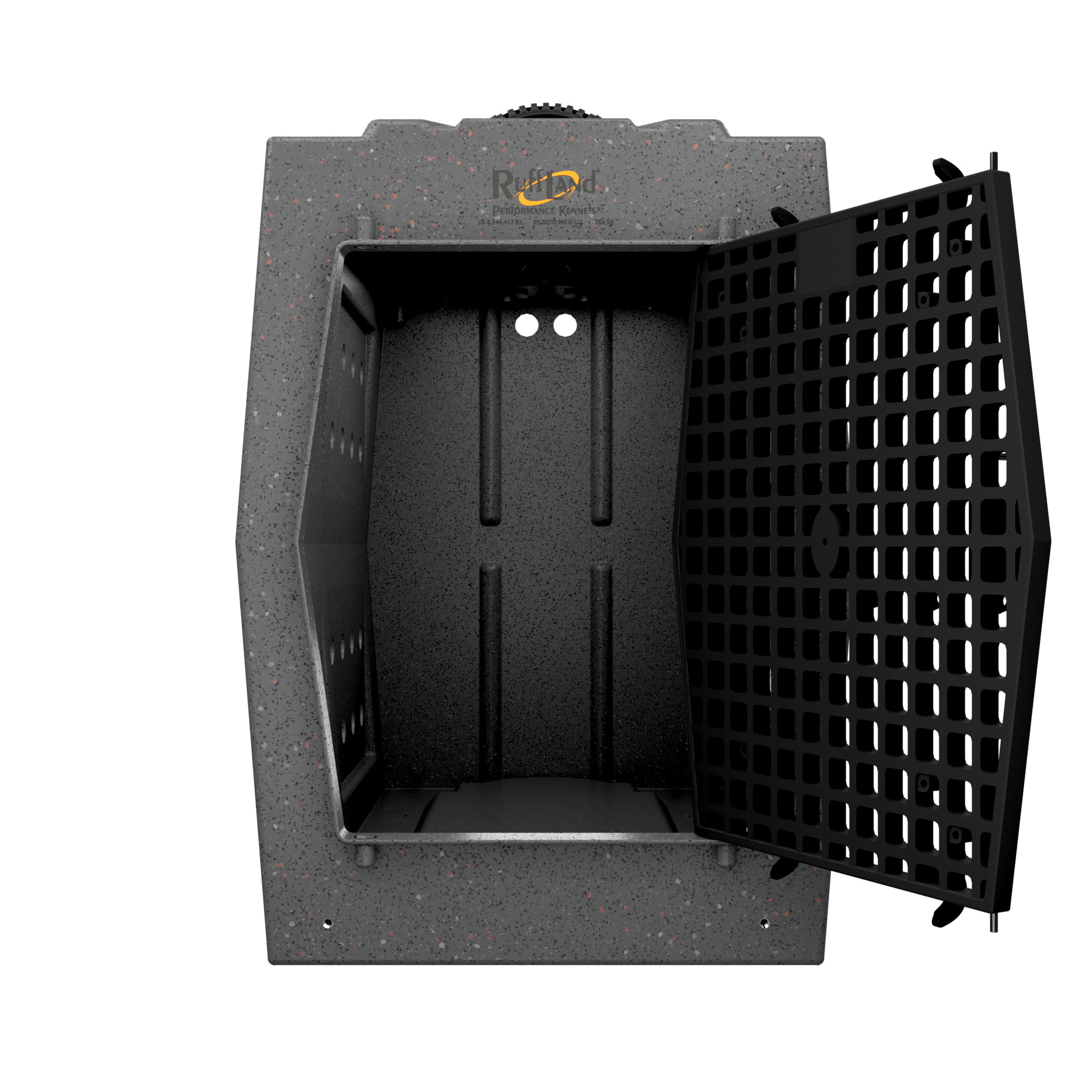 Subscribe to our newsletter to get important news, amazing offers & inside scoops:

Lead times on individual orders
Our anticipated lead time is currently 2-4 weeks, however we are continually trying to improve on this so your item(s) may ship sooner, (pallet orders 10-12 weeks). Thank you in advance for your understanding!

NOTICE: HOLIDAY PEAK SHIPPING SURCHARGES We want to alert our customers to temporary shipping increases that will be in effect through February 2023. During this time, FedEx and UPS have peak season surcharges that are added on to every oversized package. Considering this, shipping charges for Large and X-Large Kennels will be increased by $40.00 when choosing the UPS or FedEx shipping method during checkout to cover this.